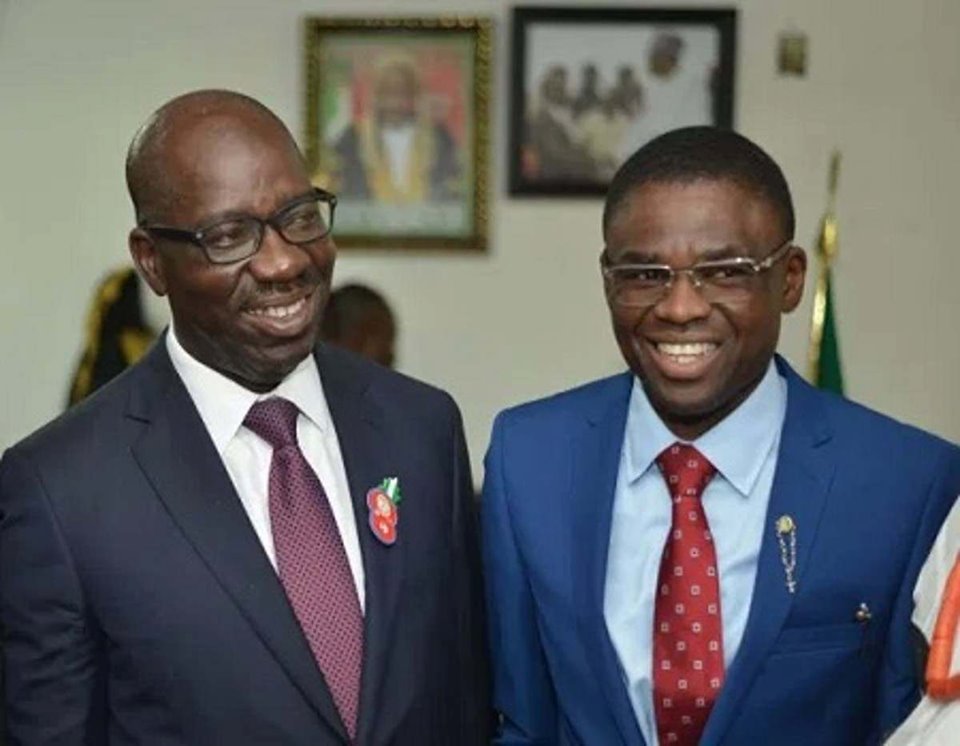 My experience with Obaseki in Edo

•Why things will be tough for him on election day

SIMON Ebegbulem is the Commissioner for Special Projects in Imo State. Before then he was the Spokesperson to Comrade Adams Oshiomhole as National Chairman of the All Progressives Congress (APC) after working as Correspondent with Vanguard Newspaper in Edo state for many years.

I recall when Comrade Oshiomhole as governor then endorsed him; Comrade called me about 2 am, in fact, that night, the current SSG, Osarodion Ogie was waiting to see Comrade and I was with Comrade and Comrade told me that he wanted me to go and support Obaseki.

I was shocked and I told Comrade this man was relatively unknown and that he was not marketable. I said the way I saw him, he didn’t relate well with people. Comrade said that was my job, to go and market him. That was how I met Obaseki and took him around  and introduced him to the media. We went to Lagos to visit the media to make him known to the world. I had sleepless nights working for him.

I created enmity for myself because of Obaseki. Pastor Osagie Ize-Iyamu was the candidate of the PDP then and I was very close because we had known for years since I came to Edo state as a journalist.  But when Comrade said we were going to support  Obaseki, there was nothing one could do than to support him. I recall in the course of my duty, Ize-Iyamu called me on several occasions and said Simon I am your friend and I have known you for years, even if I am in PDP, there is no way if I win I will not work with you like a brother that I have known you for years. He said this Obaseki that you are supporting, there is not much he can do because you barely knew him and I can tell you the man will disappoint you people and he went on to tell me that he was appealing to me that even I didn’t want to support him, I should not be damaging his campaign with my reports. He said he knew I was doing that because of Comrade but this guy (Obaseki) would disappoint all of us. I told Pastor I knew him very well but that Oshiomhole was like a father to me, so there was no going back on the Obaseki project.

There were other leaders of the PDP, Dan Orbih and others who are my friends and they believed that I was hitting hard on them. I was close to Oshiomhole and I was in his inner circle, then Philip Shaibu and Osarodion Ogie were Oshiomhole’s foot soldiers.

I remembered when I told Philip, he was shouting, he told me that this thing Comrade was doing, all of us would regret it. He said he had monitored Obaseki over the years and he was not somebody that would move the party forward or even continue from where Comrade was going to stop,  that he was going to stab Comrade at the back.

By this time, campaigns ahead of the primary election had started and Comrade kept appealing to Ogie and Philip to stop their ambition and support Obaseki. I remember vividly, Philip wept when he said he had to concede because of Comrade Oshiomhole shed tears when they eventually agreed to work with Obaseki, and the following day, Philip called that he was going to Edo north to campaign for Obaseki.

He told me I should still try and talk to Ogie that he was still angry about the development. That was how eventually everybody came and worked for Obaseki and worked seriously. We had sleepless nights. I risked my life for him, I was threatened because was supporting him but because I thought he was going to continue the processes Comrade had started in the state, I didn’t bother about the threats.

One thing I asked Comrade then was if was sure this man would be loyal and he said Simon, I don’t care about loyalty but I believe this guy will be able to continue all we have started. I don’t need somebody who will come and destroy all that we have started, it is not about loyalty because Edo people have suffered over the years. We must consolidate the gains we have made. Comrade has a passion for the people so that was why he felt Obaseki was the best option.

But Immediately Obaseki was sworn and he settled down, things started changing. I was still practicing in Edo state then. I was close to the politicians and the governor but then I started seeing the signals that things were going to be bad.

Suddenly I heard he was saying that I was not from Edo State, that I was Igbo. He invited me one day to his house after the election and was asking me how his media unit would be run and I told him what was being done so that his programs would be adequately reported as government and get wide publicity. He said that he would engage those who would cover his activities.

He said he did not want the government house press corps anymore and that anytime he wanted his programs aired, he would engage the electronic media outfits and not to have government press unit permanent in his convoy.

I tried to convince him otherwise and thereafter he said he would get back to me. I kept supporting the government from outside. Before you knew it, he banned all APC leaders from coming to government house. I met him and tried to let him know the implication, he said no that whatever politicians want, they should go to Iyamho, that Comrade was the leader of the party,  that he wanted to use the Lagos model where party issues are discussed at Bourdillon and not at Alausa so he wanted to replicate the same thing in Edo.

Politicians were already angry about that particularly after what they went through to bring the governor in.  It was a very difficult election because they contested against a very strong candidate, so they felt bad. Experience with my Editor One journalist came to town from Lagos and said he would want to interview the governor.

I took the journalist to him. When I got there, I reminded the governor that the politicians were not happy and that he should find a way to assuage their feelings. He said in the presence of the journalist that we didn’t understand that things had changed in government.

He went further to say that he was going to do what  Stalin of Russia showed his team by plucking off the feathers of a chicken.  He was demonstrating it and that by the time you finished pulling off the feathers, with the chicken blood-stained, the chicken would be struggling for breath and life but that when you throw some crumbs to it, it will still be struggling towards you to get the crumbs. He said that was what he was going to do to politicians in Edo state. I was shocked.

He was shocked too and I said Mr. Governor, this may not work,  that that time, it may be too late. He said I hope I was aware that one of my brothers was in jail (Osakpamwan Eriyo), that if I dared him, he would send me to jail.  We laughed about it but I told him that if he tried that with me, the whole country would hear us. When we left that place, the journalist asked me is that the kind of governor you people elected?

He told me to mark it that this governor is going to fight Comrade. I said I won’t be surprised because the signals were already being seen. As at that time, three members of the APC that worked for him were already in jail. Experience as CPS to Oshiomhole When Comrade was vying for the national chairmanship of the APC, he told me that if he got it, I would be his spokesman and go with him to Abuja, that I have tried in Edo state have stayed there for years as a Correspondent.

So that was how I went to Abuja when Oshiomhole became the National Chairman. But Obaseki was saying that how could he give an Igbo man an appointment, that was what he said but I didn’t bother. I went to Abuja. What now shocked me was that a man that I worked for, spent sleepless nights for would not even appreciate the fact that Comrade had elevated me and taken me to Abuja. One day he came to Abuja in the presence of Comrade Oshiomhole, he said my stomach was protruding now that I was ‘eating’ money. Comrade laughed and felt he was joking but I knew he wasn’t joking.

He was not happy that I was given an appointment in Abuja, maybe he expected that I would remain in Edo state and be asking for crumbs from him under his government. He went on to tell me that when he was already dealing with me in Edo, I ran to Abuja but I told him outright that he could not punish me as he didn’t own my destiny and that I rejected his poverty thoughts for people.

He was shocked and Comrade quickly dismissed me and sent me out for other assignments. When he was narrating his problems with Comrade to some governors in Abuja, he was saying that Comrade wanted to impose an Igbo man on him as an aide and Comrade, to be honest with him, never forced him to give anybody an appointment because he never wanted to interfere in the day to day running of his government in Edo state. Yet the same governor brought people from Delta and Lagos states who are not from Edo state and today they are some of the most influential people in his government.

When he sees you wear good cloth, he would want to block that means through which you get the money. APC leaders were coming to Abuja to complain but Comrade was begging them to be patient with him.  I discovered and  I  told Comrade that Obaseki didn’t want to see anybody close to you (Oshiomhole) around the government. He wanted to erase all the traces of Comrade in Edo.

There are so many bad things he did against people and that is why it will not be possible for him next Saturday’s election.