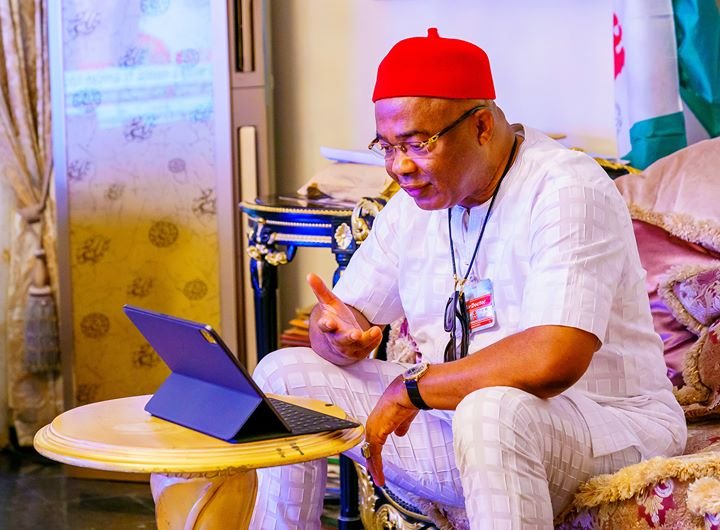 Share FacebookTwitterWhatsAppEmailTelegram
The word recovery especially when used in governance can only be synonymous with going after loots and other stolen government properties. But this goes beyond the narratives which further explains the relativeness of the word recovery by the present administration in the state.
Gov. Hope Uzodinma may not have been far from reality when he made clear the 3 cardinal points of his administration viz: Reconstruction, Rehabilitation and Recovery. The truth is that the recovery mission of Gov. Hope Uzodinma started from the tribunal up to the Supreme court that gave the landmark judgment on January 14th that returned him as the governor. This saved the state from being hijacked by the opposition Imo PDP through Emeka Ihedioha whose seven-month administration was characterized by a personal vendetta, witch-hunt, administrative rascality, demolition of inherited projects, massive looting of government properties, abuse of public trust, intimidation, and harassment of perceived opponents, etc; all of which failed to produce open support for that government.
The recovery agenda of the shared prosperity government of Gov. Hope Uzodinma overtime keeps topping the chart and has spread across the spheres of governance in the state. One of the most interesting areas is the civil service. The civil service reform took another swipe when the present administration before its 100days in office recovered over 2 billion naira from ghost workers, embarked on several maintenance works in the state secretariat, etc. These gestures didn’t go unnoticed as they recalled the airwaves and attracted so much commendation from Imolites.
Another most interesting part of the recovery mission is the uncovering of ghost pensioners in the pension scheme. This discovery is rather unfortunate especially after the same government of Emeka Ihedioha had embarked on a charade in the facade of the verification exercise. Indeed, it was a government goaded at rebuilding the stomach infrastructure of Ihedioha and his goons.
Fighting corruption is dangerous and fraught with wanton backlashes. Yet the Imo helmsman is not deterred. For instance, Gov. Hope Uzodinma has decided to take the bull by the horn by weeding out corrupt elements out of ISOPADEC hence the unnecessary and unwarranted attack on the governor. Unbeknownst to them, however, we have a governor who can never be swayed by their antics.
Related Posts

Nov 26, 2022
It is noteworthy that the shared prosperity government of Gov. Hope Uzodinma has transformed every sector of the state as seen in the massive road constructions ongoing, with many already commissioned. Similarly, payment of salaries and pensioners has been handled courageously. Prompt response to the COVID-19 Pandemic in the state, revitalization of the Avutu poultry, amongst many others, all attest to the wonders of the Uzodinma 3R vision.
Before now, Imo was on the edge due to the brinkmanship of those charged with democratic leadership. But the present administration of Gov. Hope Uzodinma is swiftly changing the tides. But as usual, the opposition Imo PDP has resorted to its childish and comical conspiracies to play down the strides of the governor.
In a desperate bid to sneer and paint the shared prosperity government of Gov. Hope Uzodinma and his laudable achievements in the state in false-light, the opposition Imo PDP has turned cynics, pestle-wielding critics, unrelenting self-appointed activists, idle and idling, twittering collective children of anger (apologies to Dr Reuben Abati).
Imolites should therefore continue to repose their support and goodwill on the government of Sen Hope Uzodinma, and not be taken in by the mischief of the PDP angry goons. For the time will surely justify the good intentions of our amiable governor. God bless Imo State of Nigeria.
Hon. Cmrd.Chimezie Odemenam {Oyi of Oyi} National Chairman,
94
Share FacebookTwitterWhatsAppEmailTelegram