Beyond the historic Onne landing 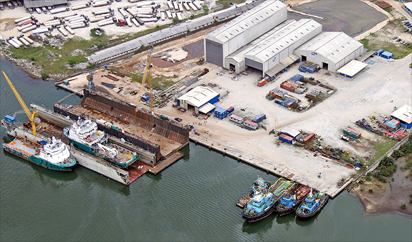 Many Nigerians may not understand the big fuss that shadowed the arrival of the Maersk line Stardelhorn container vessel which made history by berthing at the Federal Ocean Terminal, FOT, Onne in Rivers State at exactly 4:20 p.m on Saturday, August 15, 2020. The history has nothing to do with Onne Port welcoming a seagoing juggernaut. Onne is not a stranger to shipping.

The biographies of three Nigerian naval admirals of Igbo extraction who fought for Biafra – Okoh Ebitu Ukiwe, Ndubuisi Kanu, and Allison Madueke – describe in vivid details the fierce battles that took place at the Onne Port between the Federal frigate-led flotilla and the makeshift Biafran navy in 1967. This was where Admiral Kanu distinguished himself as a daredevil warrior despite commanding an improvised patrol craft.

The point here is that the Eastern seaports at Onne, Port Harcourt, Calabar, Warri, and Koko had served Nigeria for decades before the civil war. But from the past 50 years (after the civil war) to date, the development and usage of these ports had been deliberately abandoned apparently on cynical political grounds, a graphic case of hate governance by the powers that have been.

About 40 years ago, the Eastern ports, along with heavy industries like the refineries at Port Harcourt and Warri, the steel factory at Aladja, numerous private manufacturing plants, and international markets at Aba and Onitsha, came together to give the South East and South-South areas a promising economy.

But with the gradual neglect of the Eastern ports and collapse of these strategic federal and private industries, the massive population drift towards Lagos started as from the middle of the 1980s. Lagos was still the capital of Nigeria.

Even when it lost that political status to the upstart Federal Capital Territory, Abuja, Lagos quickly assumed the status of the economic capital of the country. Today, there is hardly any family in Nigeria that does not have at least one of its members as a current, former, or intending resident of Lagos.

Lagos is the number one destination for dream chasers, but not always by choice. It has the biggest international airport and the only “viable” seaports at Apapa and Tincan Island. It harbors the massive infrastructures built with our commonwealth from colonial times through the oil boom years up till 1990 when former military President, General Ibrahim Babangida, completed the 11.8km Third Mainland Bridge.

This bridge was the longest in Africa until Egypt’s 20km October 6 Bridge came on stream in 1996. Abuja comes second to Lagos in terms of attracting opportunity seekers. What sets Lagos and Abuja apart from other cities are Federal Government presence and infrastructure.

These people are coming from neglected areas of the country. With time, Lagos and Abuja started to choke with unemployment and crime. Those who cannot get jobs simply devise ways of taking from those who have them through frauds, robberies, kidnapping, cultism, and what have you. The case of Lagos is rather unique.

Everybody from all corners of Nigeria comes to Lagos to look for petroleum products and to evacuate their containerized goods. The container-laden trucks and tankers from all over Nigeria block everywhere in Apapa and environs, making life miserable for everyone. Try as they have, no Federal regime has been able to find solutions to the infamous Apapa gridlock. Our number one avenue for non-oil foreign exchange earnings can’t move.

The Nigerian government has now been forced to look eastwards. If Lagos had continued to work seamlessly, nobody would probably think East. It is so shameful that even when an Easterner, Goodluck Jonathan, spent 64 months as president of Nigeria, he was too busy appeasing the North and his ex-militant kinsmen to fix the Eastern ports in his ancestral backyard.

The Lagos State Government, a prime beneficiary of the undue emphasis on Lagos, groans from the burden of the national population influx it carries on its shoulders. It has sometimes responded with desperate measures such as forceful ejection of fellow Nigerians to their states of origin.

Some have opined that the coming of Maerskline’s Stardelhorn, 300 meters by 48 meters mammoth to Onne was no big deal because it only came to pick up its empty containers back to Hong Kong.

How wrong! That the largest ship ever to berth on Nigerian waters came to Onne shows that if properly developed, there is no kind of shipping that cannot be done here. Are we saying that if Onne was the only port in Nigeria we wouldn’t develop it?  It was foolish to think that developing the Eastern ports would be to the advantage of a particular tribe in that part of the country.

It is even more foolish to subject everybody in that area to economic strangulation just so as not to benefit a particular tribe. Nigerian ports belong to all Nigerians. The neglect of the Eastern ports has hurt the North more than others because of the suffering people from far-flung places like Sokoto and Maiduguri endure to freight goods to and from Lagos.

The Federal Government must remove all remaining obstacles in the full reactivation of the Eastern ports.

They should also revive the Eastern rail line just as they have done the Western flank. It is not only the oil-based economy that should be diversified, but our ports and railway resources should also be diversified.

Our British colonial masters gave us an economic foundation that had two legs – East/North and West/North. But due to hatred, we amputated the East/North leg, and everybody suffers!

“TINUBU is a Greedy Man”