APC to hold Presidential Campaign Rally in Lagos on Saturday 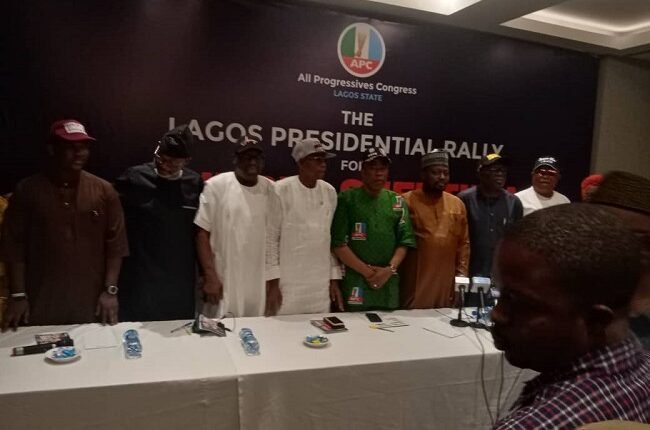 The Lagos State chapter of the All Progressives Congress (APC) has expressed its readiness to hold a campaign rally for its presidential candidate, Asiwaju Bola Tinubu on Saturday.

The rally, according to the Director General of the State Campaign Council, Senator Ganiyu Solomon, will be held on Saturday at the Teslim Balogun stadium on Saturday.

For the Director-General, the rally is a homecoming for the former Lagos State governor and the national leader of the party.

He said, “The rally holds a promise for mass attendance by members of our great party and members of the general public because of the popularity of our Presidential Candidate, Asiwaju Bola Ahmed Tinubu, who has remained the most consistent, the biggest contributor and the most visible democratic icon since the advent of this dispensation in 1999.

“You may wish to recall that Asiwaju Tinubu excelled as a Senator of the Federal Republic representing Lagos West Senatorial District, and as the Governor of Lagos State between 1999 and 2007. Therefore, the event is like a homecoming for our leader and mentor who has become a national pride.

“As a responsible political party, it is imperative to seek the cooperation of members of the general public as regards the need for temporary diversion of traffic and mass movement of supporters within the vicinity of the rally.

“We need to reassure you that the Nigerian Police Force, LASTMA, and other law enforcement agencies will be fully mobilised to ensure an event devoid of security infractions and traffic disruptions.

“It is also important to enjoin all participants to be of good conduct and display our characteristics of peaceful conduct at our party.”

Speaking about the security measures and the anticipated number of attendees at the rally, the state party chairman, Pastor Cornelius Ojelabi said, “On the issue of security, we will try to make the venue very conducive for all.

“The question of the number being anticipated is very simple. This is a homecoming for our national leader.

“This is also the first time Lagos state will be presenting a presidential candidate who has become a household name not only in Lagos state but in Nigeria.

“We are not ruling out a huge number of attendees. We can assure you there will be a massive turnout and adequate security for all attendees.

“You just come and see the love the people of the state will show to Asiwaju Tinubu.

Lagosians want to hear from the presidential candidate of the party. We have made adequate arrangements for everybody that will be at the rally.”

Spokesman of the party, Hon. Seye Oladejo said the police, LASTMA and other security agencies will be mobilised to ensure a rally devoid of all infractions.

He stated that there will be formal accreditation for journalists.

He added, “We believe we should have an orderly event. The accreditation will be held tomorrow. We have learnt from previous campaigns we have held and we are paying attention to the well-being of all attendees.”

National youth leader of the party, Hon. Dayo Israel said, “The national chairman of the party, Abdullahi Adamu and other chieftains of the party will be in attendance. In Lagos, on Saturday we have a duty to turn up for Asiwaju Tinubu. A victory for Tinubu is a victory for Lagos. We can show the world that Lagos is for Asiwaju a hundred per cent.”